I spent much of March and April of 2010 in Roswell, NM for work. I consistently flew there on Delta via Los Angles, which was always a ~14 hour three airport affair. I loved it, and I didn’t miss any connections on any of my trips to Roswell

Los Angles from the Air:

The first time I headed to Roswell was also my first time in L.A. Although, I never left the airport, so that makes counting it a bit strange. I find, that I airports count as going to a state but not a city. Such as, “the last time I was in California was when I flew through LAX to Roswell”, is fair but to replace California with L.A. isn’t. I suppose this is because cities have a character that one needs to explore to say that one has been there. States do too, but it highly varied from area to area, and people don’t expect you to be familiar with every area to say you have been there. One can often get a good sense of whats its like in a state from the airport; not so with a city. Anyways, here’s a shot of the iconic LAX entry way:

We worked at the airport in Roswell. The airport is something of an airplane graveyard, or at least long term, until the economy gets back on track storage yard. There are on the order of 100 planes in various states of disrepair strew about the airfield.

Working in Roswell sucked. But one day we took a half day off from working and went skiing for a full day. From the top of the slopes one can see nearby Sierra Blanca (on the left), the southernmost high peak in the contiguous United States, which means that all higher peaks are farther north. Towards the right, in the basin one can see White Sands.

On the way back from this first trip to Roswell I completed a challenge feat. I was on the ground in all four continental us time zones within one day. I accomplished this feat by flying from Roswell (Mountain) to Los Angles (Pacific) to Minneapolis & St. Paul (Central) and back to Boston (Eastern). It was the only time on any trip to/from Roswell, that I had a layover in the Central time zone, and therefore the only time I completed this feat. Google latitude should offer rewards for this sort of thing ala foursquare. 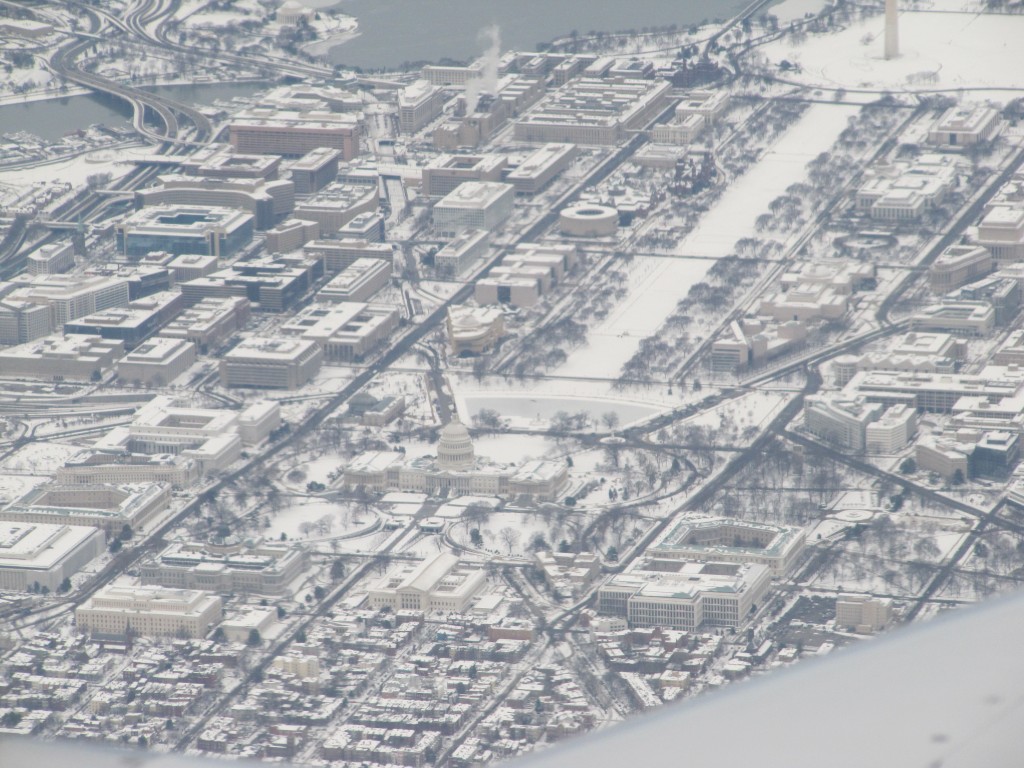 In February 2010 work sent me to the Shenendoa Valley of Virginia, about 2 hours from Washington D.C. I flew in between the two Snowmageddon storms, and made it out to Bridgwater, VA. before the second storm hit. The storm there dropped only four inches or so, which the local services were totally able to handle. Although, I did make the mistake of letting a friend from Los Angles drive in the snow, and he managed to get pretty suck in a parking spot. It was embarrassing; we didn’t tell the people who helped us out that I life in the north.

After the second storm went through, on Friday February 12th, Lincoln’s Birthday I managed to snag some time in Washington itself. I had never been to the district before. I had lunch with Emma, a CSG girl whom I mentored in college. She is pursuing a computer science degree at George Washington, so I guess I may have had some effect. She is a big fan of going to see the monuments. She claims that is often a drunken Saturday night activity. So we went to see them, with 2-4 feet of snow on the ground. 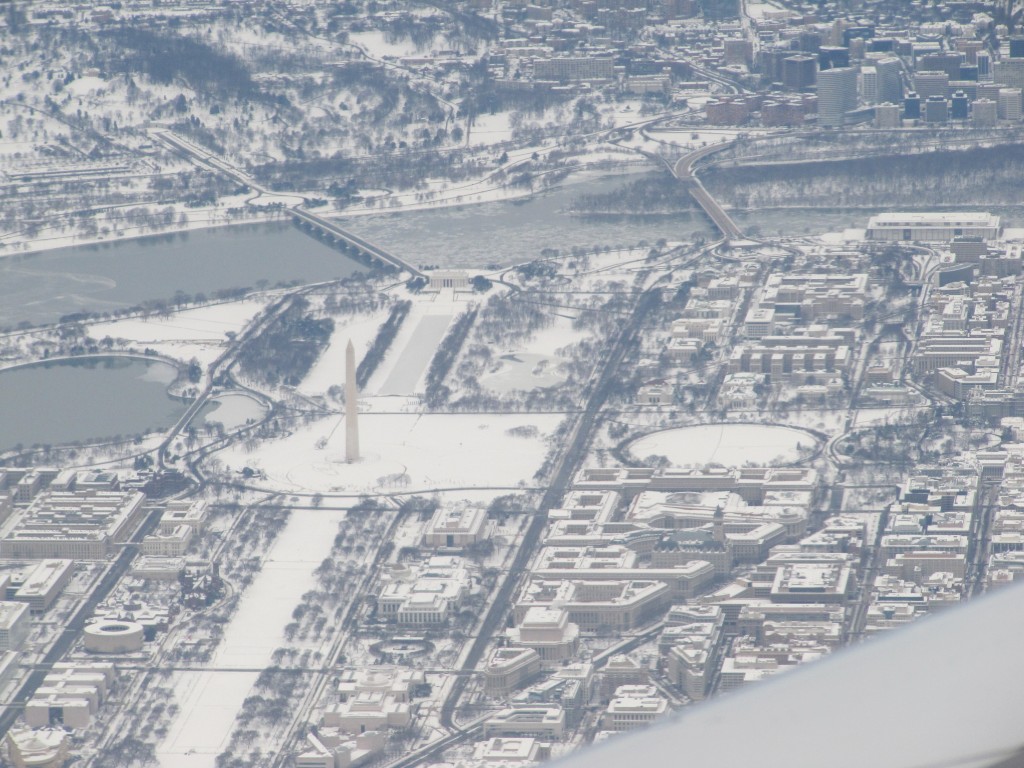 First we went to the Washington Monument: 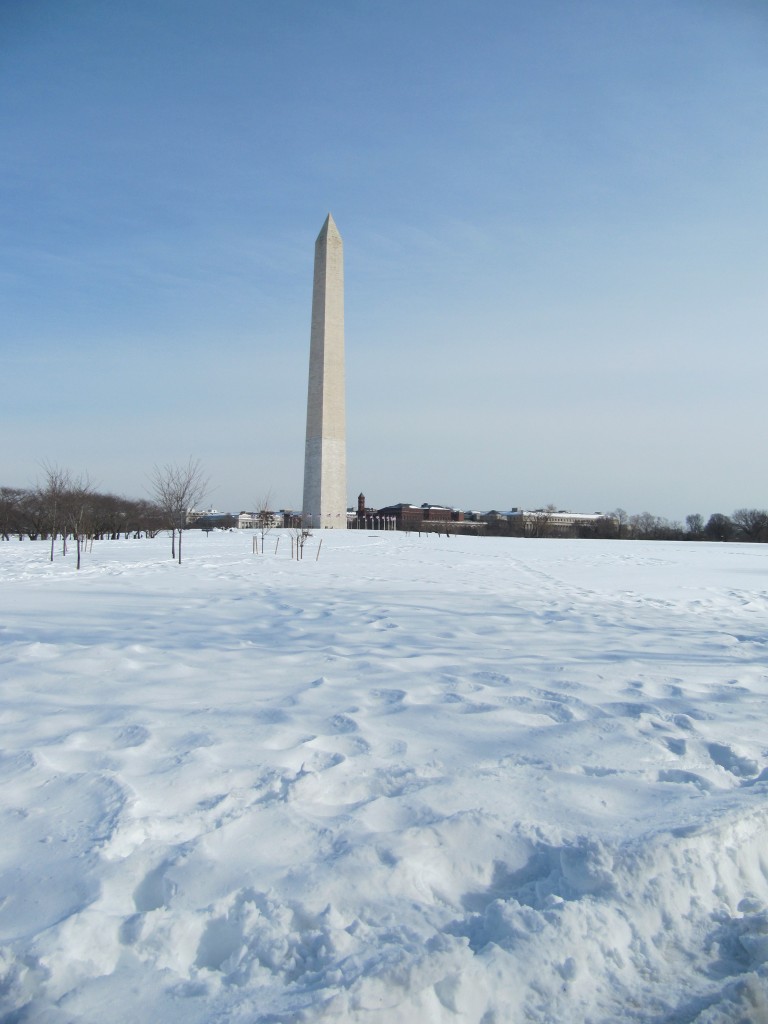 On the way there, this is as close as I got to the White House: 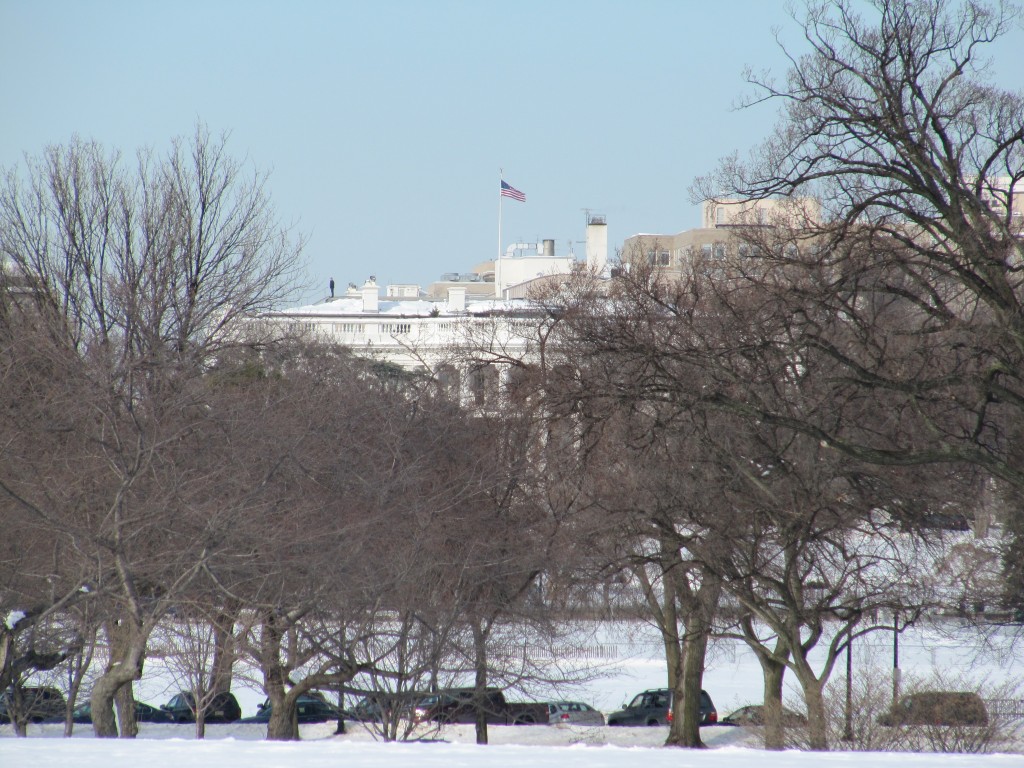 Next we went to the Lincoln Memorial, which was not doing anything fancy for his birthday. It looked rather ominous on the snow covered hill, like something out of Logan’s Run, but with more people around. I am just in love with this photo. It is certainly my favorite of all the recently posted ones, even that 15 second exposure of Boston at night. 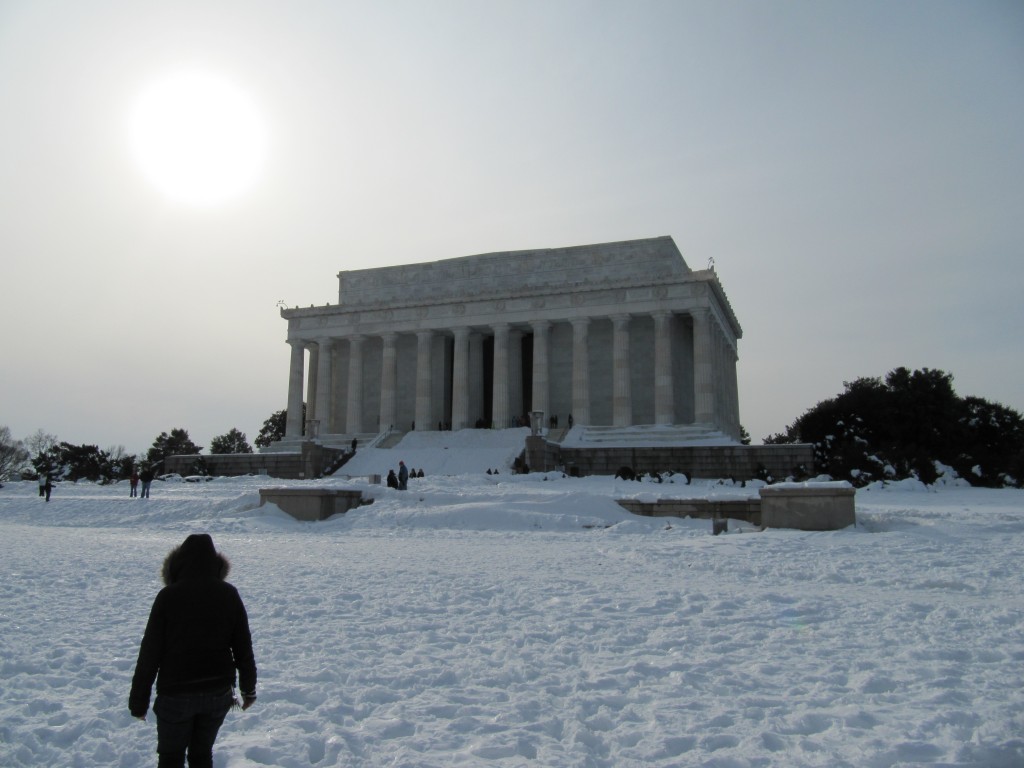 From there I got an off center shot of the Capitol building. 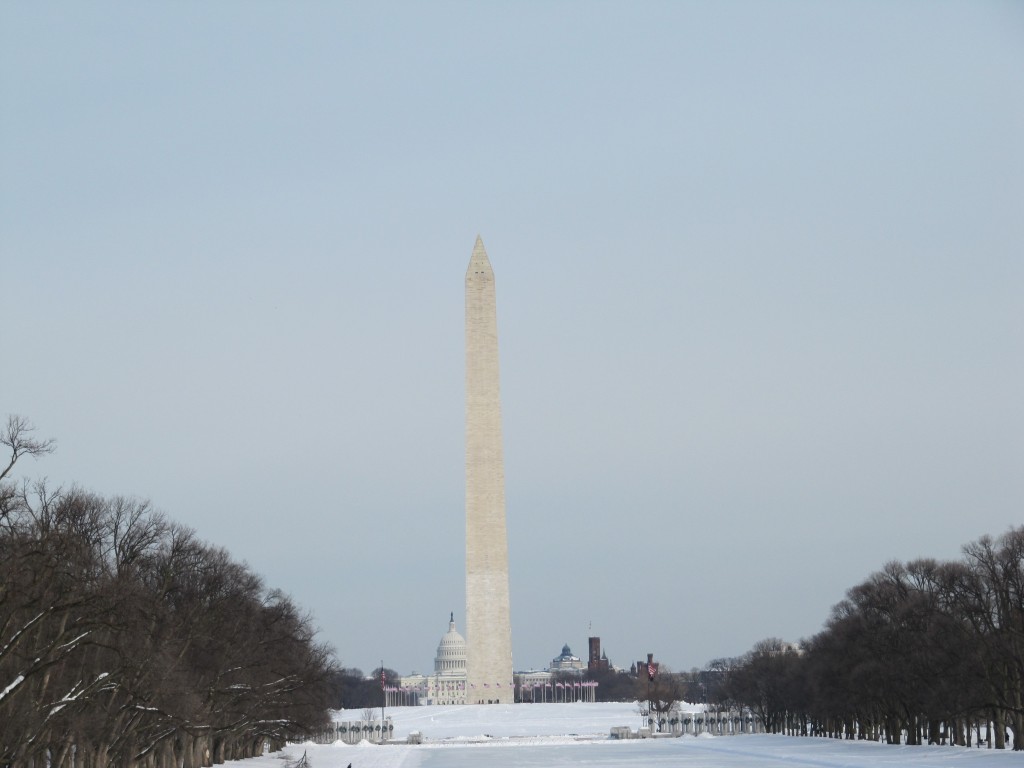 We then walked back to GWU and parted ways. I later drove much closer to the Capitol building on my way to the Air and Space Museum. I only spent an hour at the museum, which was all I had before my flight, and all I wanted to spend. I only had enough quarters to pay for 15 minutes of parking; damn it was expensive, but I didn’t get a ticket (probably thanks to the huge snow banks). It was really disappointed by it. Although, I hear the good stuff is all out by Dulles, so I will have to try that some time. 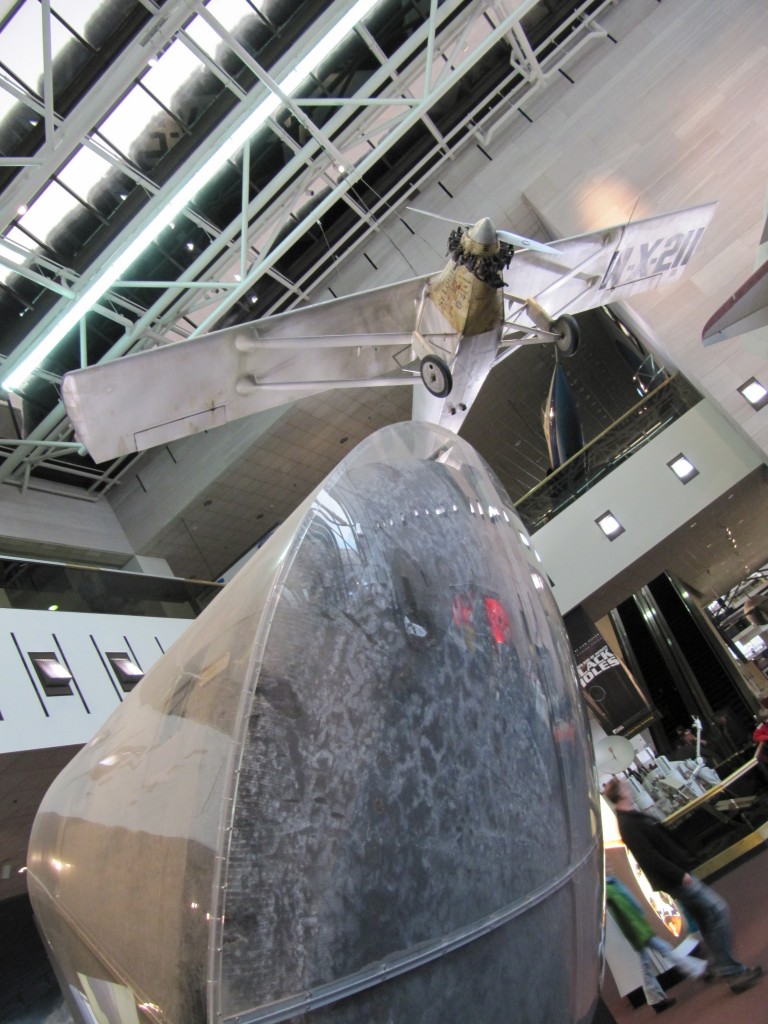 I despise the North Point building in Cambridge, near the Museum of Science for its huge white lights. They are the brightest lights in the Boston skyline as viewed from the Cambridge, Somerville, and Arlington areas. The building, is nothing more than fancy apartments and condos, some with great views, but the bright lights atop it ruin the view for so many other areas. If it were a more important building in the city, maybe it would be ok, but I’m not even sure. Anyways, a friend of mine, Brian, until recently lived at North Point. Before he left he had a party and we got to go up on the roof deck. It provided a great view of the city, if only because it by necessity didn’t include those damned north point lights.

A panorama of the skyline:

It gets a little blurry on the right side, sadly I didn’t get a real stable image of that section.

This is possibly the best shot of Boston I’ve ever taken, it is a 15 second, hand steadied exposure of the Zakim Bridge, Financial District, and the MOS:

Yo, Dawg This is Just Great

It just makes me so happy to see all this censorship bullshit in a memebrid with the Xzibit Sup Dawg meme. Over the past two days You Tube and Facebook were blocked by Pakistan for hosting images of the Prophet Muhammad. I am completely and totally against censorship, especially this particular instance. Here are some reasons:

Just be more tolerant, and maybe we won’t break your cultural laws just for the lols. But as long as you’re intolerant of one of our most basic rights/laws, we’ll be intolerant of yours for no reason other than to point out that you should be more tolerant. Clearly, someone hast to make the first move, but it won’t be us because a more open society is always preferable to a more closed one. That is progress and you are welcome to hop on the bus anytime you like, cause its an open society, that’s the whole idea.

Posted in From the Internet | Comments Closed