The second time I ventured out into the snow on Saturday was to go see my buddy Krishna play a holiday concert with his hand-bell quartet.

This time the bus was more than 25 minutes late. It is as if they just didn’t run one of the buses. I waited at my stop for a about 15 minutes, about half of which were early, just in case. Getting tired of waiting I walked down a few stops until I found a girl who’d been waiting longer than me. We chatted for a bit and I decided to continue walking up to the major street, which has more than one bus running on it. While I was doing this the bus passed me going to other way, but I made it to Concord Ave. and caught a different bus before it caught up to me. The subways didn’t help me make up time forcing me to wait as long as possible for each train and so I was 15 minutes late and missed 1/4 of the concert. Thanks MBTA!

The concert was fun. The quartet plays almost 5 full octaves, which being more than one octave per person involves a lot of running around and other interesting ways to play more notes more often. They do a lot of the arrangements themselves because many of the songs they wanted to play are not commonly arranged for such small groups. Some of the songs they played:

Sleigh Ride was particularly good. They had some help with the background sounds, the whip and the snow falling. That helped to prevent me from noticing the notes that they dropped from the song in order to be able to play it. They followed up the concert with an encore performance of Sweet Caroline / Take Me Out to the Ballgame, which is the quartets signature song arranged last spring to honor the Fenway Park tradition. I was glad I ventured out to see them play. As I learned at dinner afterwards half of the quartet is leaving Boston, so this was likely their last performance.

I don’t think I’ve ever seen so much snow fall at once. It snowed from Friday at about 1:30pm until Sunday at about 9pm without stopping for more than an hour in between. I haven’t been able to find a measuring tape but it looks to be more than a foot on the front lawn, and the balcony and the back deck. Work let us out early, so I was home on Friday before the snow hit,

thankful to avoid the problems of the snow day last year when it took 2.5 hours to get home. Saturday morning I got up and uncovered the car, which was on the street. We had the driveway plowed by some guy with a plow and I moved the car into the driveway for its 2 week long winter nap. I’ve no plans to dig it out today, I don’t need it since I’ve decied to take my vacation day anyways.

I ventured out twice on Saturday. Once to the Harvard Natural History Museum to pick up a Christmas gift I’d had my eye on since I went there in the spring with my mother. That trip was alright. The bus was about 15 minutes late, but I picked it up heading outbound about 5 minutes after it was supposed to arrive heading inbound. It’s not a long loop, and I was happy to ride and be warm instead of waiting in the cold and snow. At this point there was already 8in on the ground. On the way back the bus was running on time apparently so I missed it by 3 minutes. The entire loop takes maybe 25 minutes to run, even in bad weather maybe 35 minutes and they ensure that the bus always leaves Harvard on time, so I don’t see how it could be so late by the time it gets out here 1.5 miles away. I’ll have a post about my other adventure Saturday soon.

Sunday I woke up and finished packing. I waited patiently for my ~6pm flight home to be canceled by the falling snow. I was canceled about 1pm, which was nice only in that I didn’t have to trudge my way to the airport in 6 inches of freshly fallen snow. I spent the day watching Angel, the spin-off series from Buffy the Vampire Slayer. I finished season 3, in record time, and started on season 4. I’ve been told season 4 is the best. I thought season 3 wasn’t so bad, so this should be good.

Around 6pm I went out to shovel the snow again. It wasn’t so bad, the snow was heavy but not icy. I cleared the sidewalk and had a good bonding experience with my neighbors who were out uncovering cars and sidewalks themselves. It was still coming down, although lightly, so when I was done one couldn’t see the brick anymore anyways. After that I joined my downstairs neighbor Karen to watch the news. We chatted for more than an hour, which is the most we’ve ever talked.
Afterwards I made myself dinner and watched some more Angel. Anyways that’s the story of my last few days hunkered for the snowstorm. Enjoy the pictures. 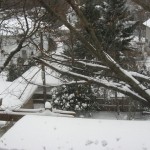 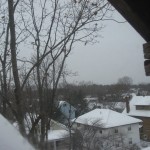 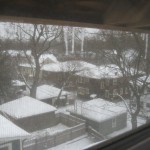 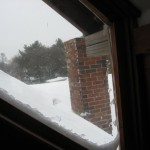 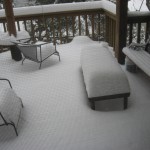 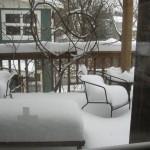 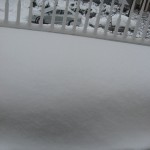 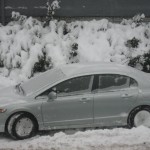 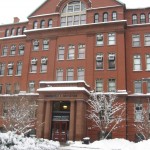 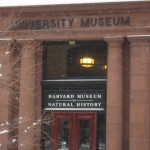 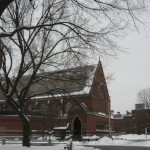 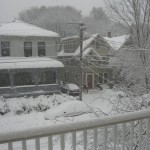 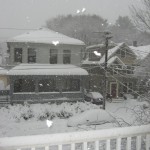 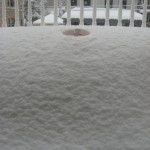 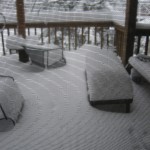 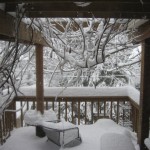 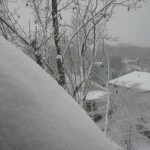 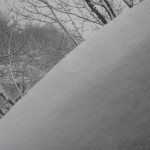 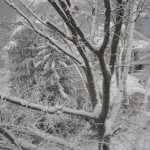 Fire on My Street

I woke up this morning to a view out my bathroom skylight of a dark column of billowing smoke. There was a four alarm fire on my street. The house 9 away, on the same side caught first. Eventually the fire spread, via radiated heat, not wind, to the house 8 away. The original house was destroyed, but it appears the house it spread to is being repaired already. Two other homes to the other side and the back also suffered some damage it seems. Some firefighters and possibly occupants suffered some minor injuries such as smoke inhalation. My room mates commented that they may have also suffered from smoke inhalation just by being in the house all day.

I never felt in danger, but from my window I didn’t consider it was so close. I got ready as usual, but in the process heard a ring at the door from my downstairs neighbor. When I got ready I found her down the street with other onlookers. She informed me that the fire department expected it to be five hours before we could move our cars. There were tucks all long the street and hoses everywhere. They must have tapped all the hydrants on our street plus some more. Apparently all the activity caused a water main to bust which temporarily gave them a pressure problem till they apparently cut off the water to there to maintain pressure.

I watched for a bit, at the time when the 8 away house spontaneously began to billow smoke from its attic to much grief of everyone there. I had previously commented that they seemed to be doing a good job keeping it from spreading. They did immediately focus on preventing damage to the new house, which is apparently the home of 3 Jesuit priests. Somehow I feel comforted that 3 Jesuit priests lived, and will soon again live on my block. Anyways, while I was watching it appeared to be snowing. Given all the water in the air and the 20 degree temperatures it seems likely. I decided that I’d need to make the 9:30 bus to work, and after waking my room mates and making my lunch I booked it to just make the bus.

At work I learned that I live on the same street as one of my coworkers (since there was only one 4 alarm fire in Cambridge this morning). Although she lives on the other block, on a private drive like thing. I did know she lived nearby, but not exactly how nearby. This may lead to some carpooling.