Sadly, it seems that coming back from the dead is more trouble than it is worth for Richard Feynman to help out is alma matter. Maybe he’ll be convinced if we can solve his 25 home work problems and then ace the take home final exam. I wrote 3 puzzles in the Feynman round, help out on another one, and worked on test solving 3 more. Each of the three I wrote will get its own write up. They are:

So Good They Named It Hull

So Good They Named It Hull is the puzzle that I helped with. I am actually not a huge fan of it, but that is mostly because I don’t like the extraction method they used, other than that it is a clever idea, and certainly had fun helping.

Spoiler The puzzle is a travel log with clues for each city/town visited. It comes in 10 paragraphs each paragraph except the first also clues a year. The aha is that each clue describes a city/town in both England and New England with the same name. The extraction is drawing letters on the overlaid map of England and New England, so the first paragraph without a year’s job is to clue how to do the overlay (line up Chester and Glastonbury with Chester and Glastonbury on the other map). The first paragraph also clues how to change countries with the line “every time I wake up, I’m in a whole other country!” The remaining 9 paragraphs each draw one letter of the answer on the map.

I was added to the puzzle on the night of the puzzle writing deadline to help them come up with interesting clues. It turns out they had to use a lot of small towns. The clues I particularly enjoy are:

I worked on test solving Text Adventure at the first retreat we took together as a team. We got a big ski house in Vermont in October. It is closer to Boston than where I actually go skiing in Vermont by about an hour’s drive. This is a fun iterative puzzle!

Spoiler As always in a text adventure game what you need to do here is draw a map. It turns out this map is a Feynman diagram (link). I believe that the wikipedia page on the topic was improved in order to make this puzzle easier. That said I never understood the extraction; I just drew the map, which was lots of fun!

What puzzle hunt would be complete without an actual Jigsaw Puzzle. The original idea was to get an actual jigsaw puzzle made for this, but that turned out to be really expensive. Instead we manually cut each puzzle out using a paper cutter. Each puzzle involved cutting 40 some sheets in a particular pattern. I cut a good 6 or 7 of these in the week before hunt, which took many mindless hours. Mindless hours were actually kind of nice around then!

Not only did I cut up this puzzle, I also test solved it. It took about 5 sages about 7 hours to put together enough of the puzzle to solve it. It was fun and relaxing! We didn’t come close to putting together the whole puzzle, as that would have taken a lot more time. 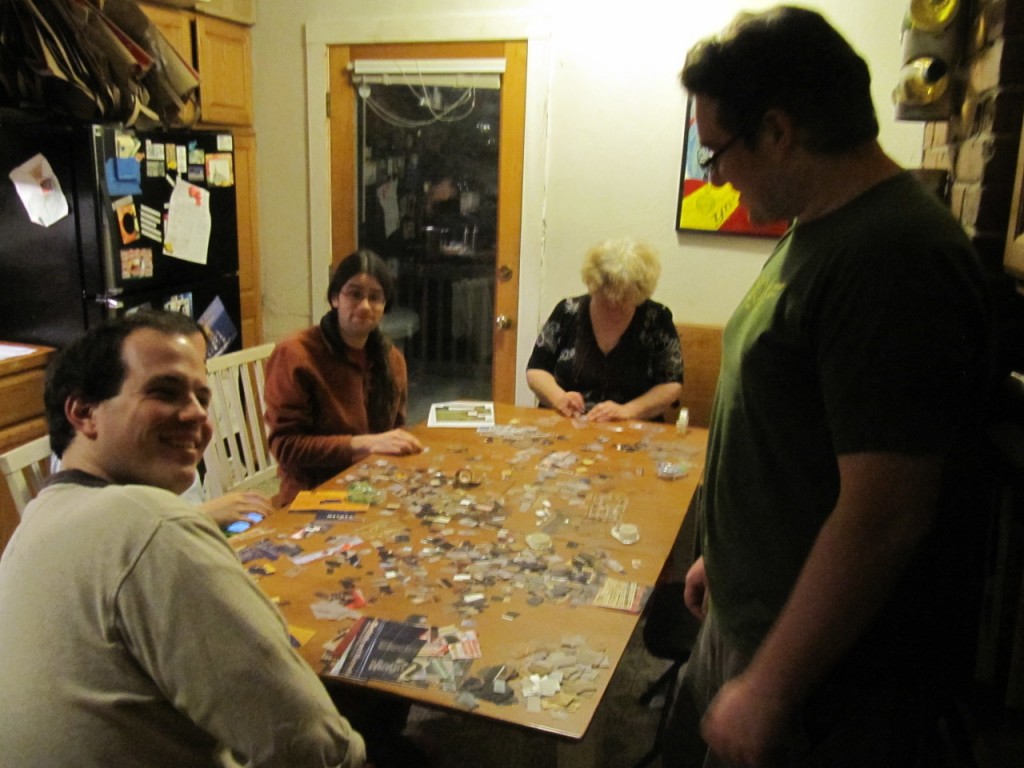 Spoiler The way this works is that there are 49 images which each make their own 49 piece puzzle. Each puzzle is made of pieces of the same shapes, but the shapes are sometimes rotationally symmetric so it is still hard to figure out where they all go. However, each of the 49 puzzles is missing exactly 1 piece. No two puzzles are missing the same piece. The missing piece has some letters on it. You figure out the letters from context or from finding the local-to-MIT location where the photo was taken. You order the letters left to right top to bottom by the place the pieces are missing from in order to create a 50th image which is full of letters. The letters spell out a clue phrase. 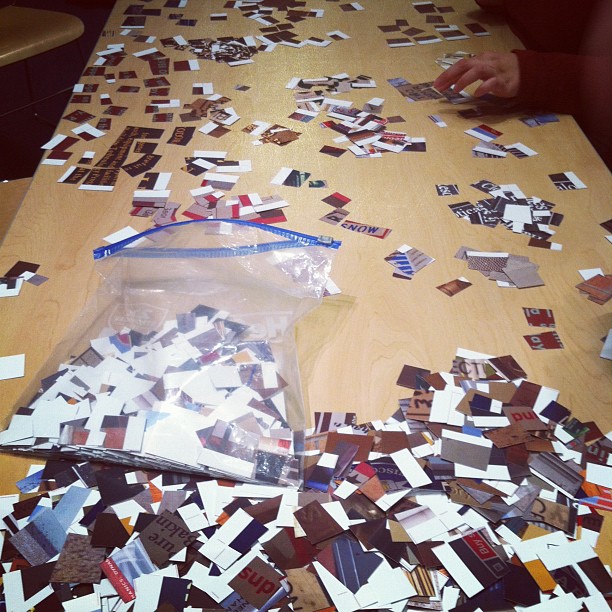 >The hardest part of test solving this puzzle is that only 2 of the solvers were unspoiled on the answer to the clue phrase as the phrase has been previously tested absent from the rest of the puzzle on most of us. Congratulations to my room mate Post for figuring this one out!

Space Monkey Mafia is a fun puzzle. It comes with a bunch of sheet music. 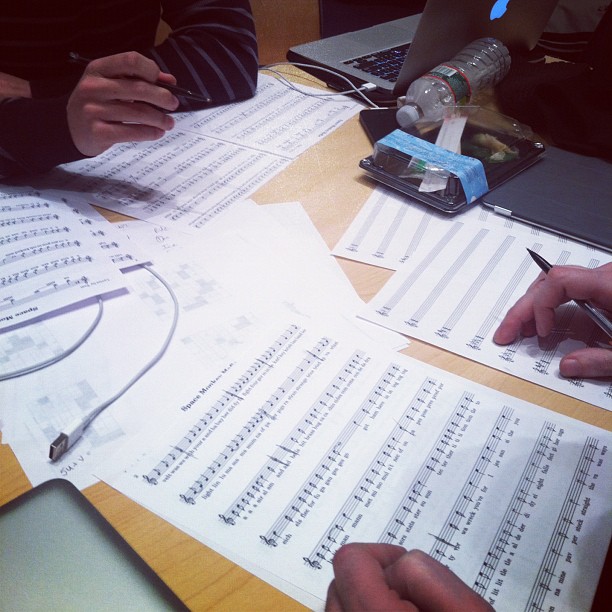 Spoiler The sheet music from a number of songs is all sorted together by note. I have no idea how you un-sort that back into songs, as that was done when I started on the puzzle. Each song includes a list of things, for example My Favorite Things or We Didn’t Start the Fire. Space Monkey Mafia is an item in the list from the latter. However, one item from the list is missing! It turns out you index the number of the missing item in the list, into the list from The Elements song by Tom Lehrer link, which happens to be set to the music of I Am the Very Model of a Modern Major-General by Arthur Sullivan link. This is clued by the by line on the sheet music. You order the elements by the time signatures on the last page. I got pretty tired of using the periodic table while test solving, but I really enjoyed this novel method of using it! This spells out SING ABOUT COINS, which is not the answer to the puzzle.

This is what is termed a “creativity” puzzle. What you do next is call HQ and schedule an appointment to perform a song about coins. When you finish the song you get the actual answer to the puzzle on a slip of paper. This is also an example of a puzzle with a totally unconstrained movable answer.

This entry was posted on Saturday, February 2nd, 2013 at 11:35 pm and is filed under MIT Mystery Hunt, Puzzles. You can follow any responses to this entry through the RSS 2.0 feed. Both comments and pings are currently closed.