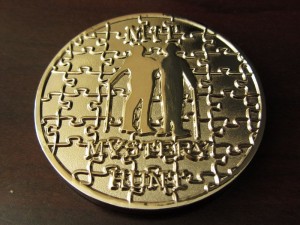 One of the many reasons why my blog has been largely silent this past year, is because, as a member of the Manic Sages, I spent a large portion of my time toiling away in secret working on the 2013 MIT Mystery Hunt. Now that hunt is over, I can tell that story, both because I have free time in my life back and the secrets are secret no longer. Of course, this adventure all started when the Manic Sages won the Borbonicus and Bodley, producers themed mystery hunt written by Codex. We found the coin on Saturday, January 14th, at 10:27 PM. Our key take away from this was that the hunt we won was too short.

Seeing as our take-away was that hunt had become, in our minds, too easy, it was only logical that the hunt I spent the last year working on turned out to be the longest, and most likely the hardest, MIT Mystery Hunt ever! Of course, in keeping with the Producers theme of the hunt we won, we did this mostly by accident. My theories on how we managed to mis-underestimate our hunt will get its own post. The goal of this post is to set the stage and describe the plot of the 2013 Mystery Hunt and how it all went together in the end. 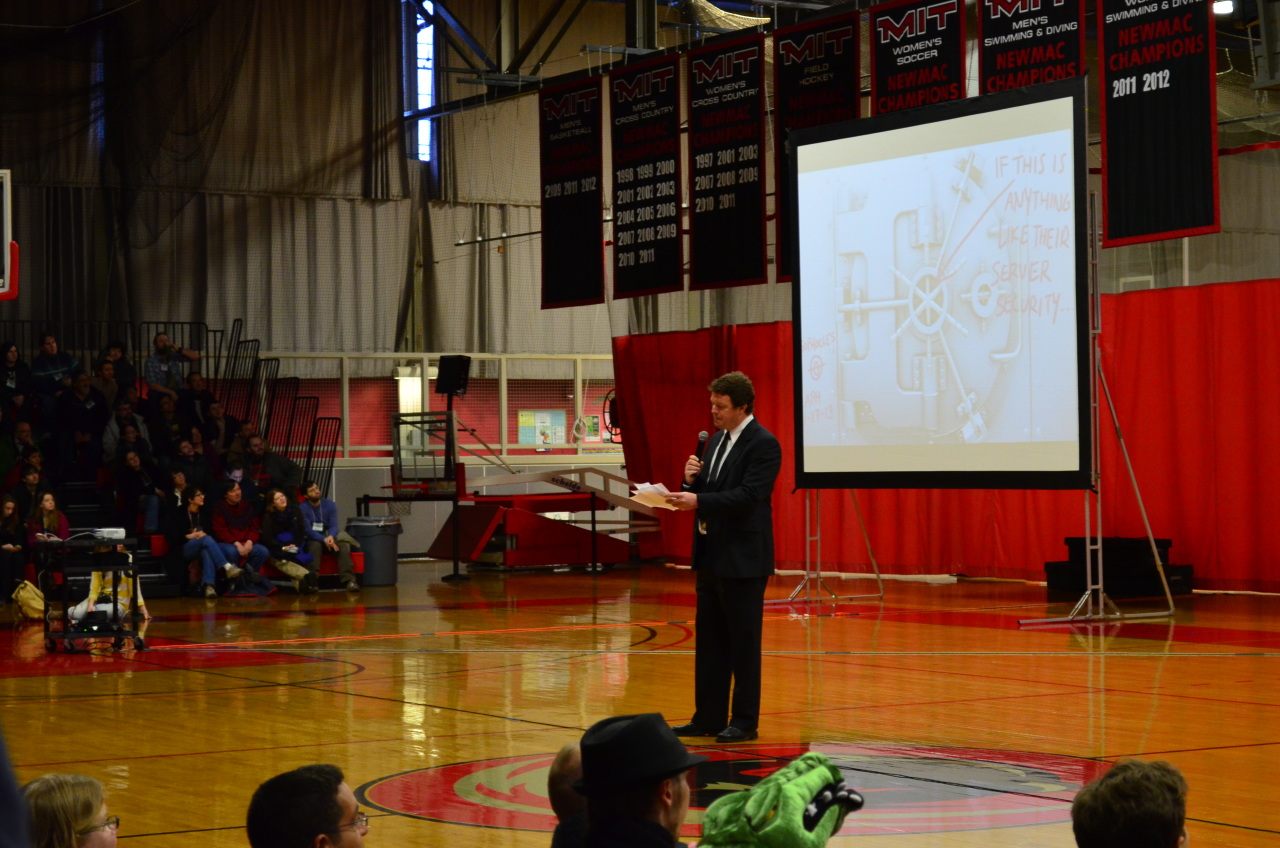 The full ~5 minute kickoff of the 2013 MIT Mystery Hunt is available on You Tube, but I will summarize. The Manic Sages, after winning the 2012 MIT Mystery Hunt, again in keeping with the Producers theme mortgaged the coin and flew to Aruba. This is how the Enigma Valley Investment and Loan or EVIL came to own Mystery Hunt. Kickoff begins with a brief intro from the President of Enigma Valley, Mr. Ben Oisy, running a brief question and answer session for all of the new account holders (teams). You see, EVIL has “converted [each team’s] probabilistic holdings in the coin into a fractional share at dramatically appreciated value.” He goes on to describe that a “no withdraw clause” allows EVIL to provide “extensive protection against financial errors you may make,” among other benefits. He drones on, but his slides, his slides appear to have been hacked. 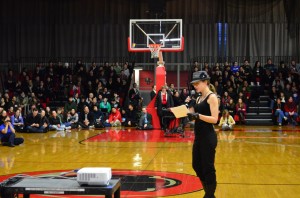 Once his presentation is over Alyssa P. Hacker sneaks into the auditorium and tells the teams that she has a plan! She has contracted with the Institute for Heist Training Facilitation and Planning or IHTFP. With IHTFP and the team’s help she plans to conduct a brilliant heist and steal the coin back from EVIL’s vault. As a first step she’s begun to hack into EVIL’s servers, go help her finish the job!

The hunt begins on Enigma Valley’s website, where Alyssa has uncovered some puzzling files. The below image links to the actual enigmavalley.com site where you can go take a look at the puzzles. There are 7 puzzles in this round and they are all supposed to be pretty easy. If you’re at all interested you should go check them out before you encounter spoilers on their answers below. Be sure to click on the puzzle and not the intercepted memo, as the memo is a spoiler, that unlocks when you solve the puzzle. Solutions are available under status on the upper right. This round should take a team of 3-6 inexperienced solvers less than 8 hours to complete. I actually plan to solve all of these myself, although I did test solve one of them in an earlier revision. It took the best MIT Mystery Hunt teams about an hour. Actually, full solving stats are available. 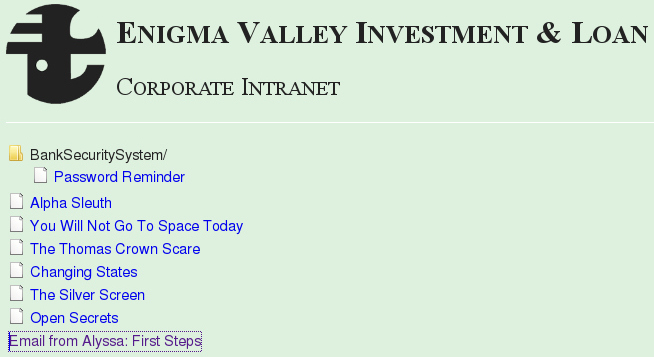 Each puzzle in the opening round has an answer which is the name of someone the bank hired to help them build an impenetrable vault. When you solve the puzzle, you get to read an intercepted memo from the EVIL bank president instructing his minions to hire the person whose name you just found. There is a meta puzzle for this round as well, which is themed as a password reminder file for the bank president. When you solve this puzzle, you’ve gained complete access to the bank’s website! At this point Alyssa, via an e-mail, suggests that you should recruit the people who helped design the bank’s vault to help you break in. 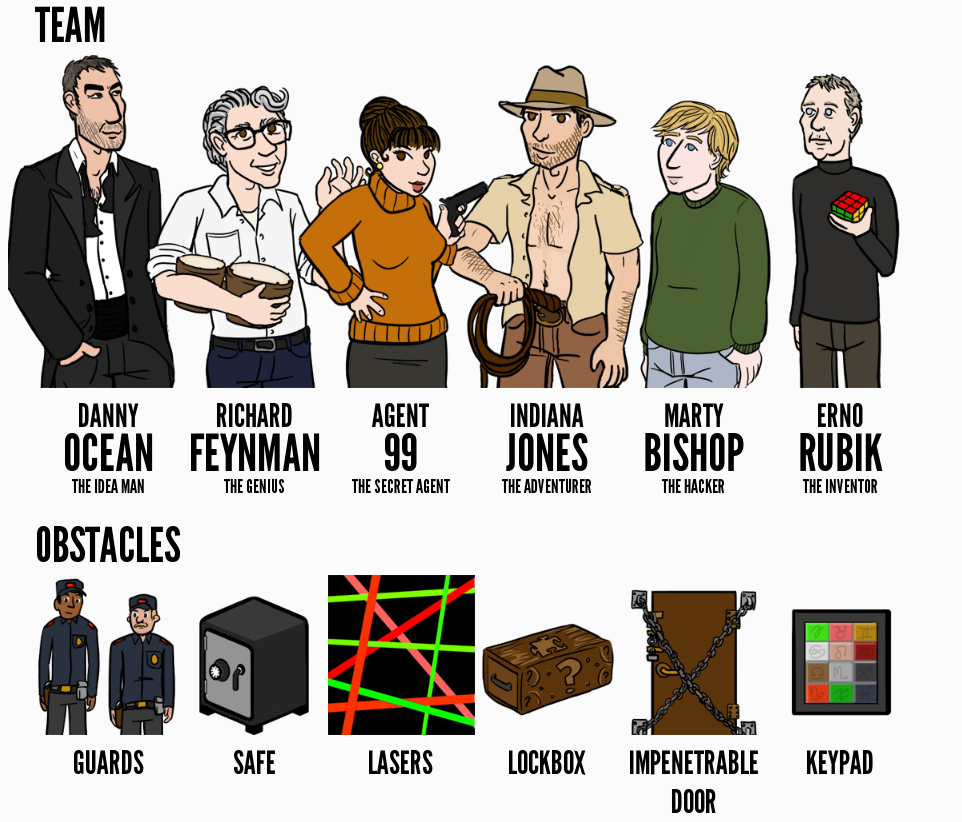 From here you move to coinheist.com where IHTFP will track your progress recruiting each designer to be part of your heist team. When you solve a meta in a round, you find a reason why that person should be mad at EVIL and join your team. These are usually bad puns. Had we had a James Bond round, the answer would have been BOND LOOSES OO RATING (or Bond looses double O Raiting). The rejected Jackie Chan round’s answer was to be something about a DRUNKEN MASTERCARD. You then learn that the person you’ve recruited has given the plans from the design of their Obstacle/Trap to IHTFP, and IHTFP has built their design. Your team schedules an appointment to come practice getting through the trap at the IHTFP Training Center. I’ll have a whole post on traps at some point.

Once you complete 5 of the 6 rounds, IHTFP informs you that they have plans for the both of the final two traps you need. This was done to make hunt end faster. Once you solve both of those traps you go on the runaround, the final part of the hunt. I’ll cover the runaround in the traps post, because, guess what, those plans were pretty darn close, but they were not close enough. The bank has modified the traps to make them more difficult than the designers designed them to be.

This entry was posted on Thursday, January 31st, 2013 at 12:01 am and is filed under MIT Mystery Hunt, Puzzles. You can follow any responses to this entry through the RSS 2.0 feed. Both comments and pings are currently closed.